Centre For Inquiry Canada has long been concerned with the incursion of pseudoscience into post-secondary education.  Whether it is the College of Medical Intuition in Vancouver or the University of Toronto, we are focussed on the promotion of science and opposition to pseudo-science for Canadian students.   Most recently, we have been very troubled to observe  trend toward endorsement of pseudo-science at the University of Toronto – Scarborough.  In February of 2015,  CFIC issued a letter to the University President, Dr. Meric Gertler.  Here is an excerpt of what we had to say at that time:

Centre For Inquiry Canada is a registered charity with the mission to provide education and training to the public in the application of skeptical, secular, rational and humanistic inquiry through conferences, symposia, lectures, published works and the maintenance of a library. We are a voice for reason on matters of human rights, education and science expressing the concerns of our members across Canada.

Recently our members have expressed to us their concerns that the University of Toronto is rapidly becoming a platform for pseudo-science to the extent that there are now serious questions of the academic merits of an education from University of Toronto. We are deeply troubled by such a situation, and such comments, at an institution which has earned so much deep regard in Canada and around the world for its educational standards.

I will relate, Mr. Gertler, several specific concerns that have been brought to CFI Canada’s attention.

Homeopathic Trials organized by University of Toronto’s Dean of Pharmacy

We have been made aware that Dr. Heather Boon is investigating the use of homeopathic preparations for treatment of Attention Deficit Hyperactivity Disorder (ADHD) in children. We further understand that dozens of scientists and academics have expressed their concerns with this pursuit in a letter to Dr. Boon and have not yet received a reply to their concerns.

Alternative Cares of Medicine Conference at University of Toronto Scarborough

Members have brought to our attention that a conference will be held on February 28, 2015 at the University of Toronto Scarborough promoting pseudo-scientific health approaches. We are particularly troubled to learn that one of the lead speakers, Ms. Beth Landau-Halpern may also be related to University of Toronto (Scarborough) Dean, Dr. Rick Halpern. We question whether there is potentially a damaging conflict of interest or appearance of conflict of interest relating to the approval of this conference.

Centre For Complementary and Integrative Medicine

We are aware that the Faculty of Medicine and the Leslie Dan Faculty of Pharmacy recently recruited a Director for a new Centre For Complementary and Integrative Medicine, another clear indication of incursions of pseudo-science into what should be the most vigilantly guarded area of science and evidence-based practices –medicine and health.

I have also received commentary directly from a University of Toronto Scarborough professor regarding vaccination which I can only perceive as questionable in nature. Upon research I found connections between this professor and an “integrative/alternative” health business.

At concern, Dr. Gertler is the basic question, is the University of Toronto becoming a platform for pseudo-science and quackery? On behalf of our members, we are requesting your response to these serious concerns.

I would be very pleased to meet with you or speak via telephone to understand your perspective and what comment you would wish for me to pass along to our members and to the public. The University of Toronto is a much-treasured institution and we are hopeful that you will be in a position to share some indication that these troubling incursions of pseudo-science will receive your attention.

As may be expected, CFI Canada did not receive a reply to our expression of concern, though we did note an increase in media and public outrage over pseudo-science at UofT Scarborough.  The headlines were piling up.  Here is a sampling. 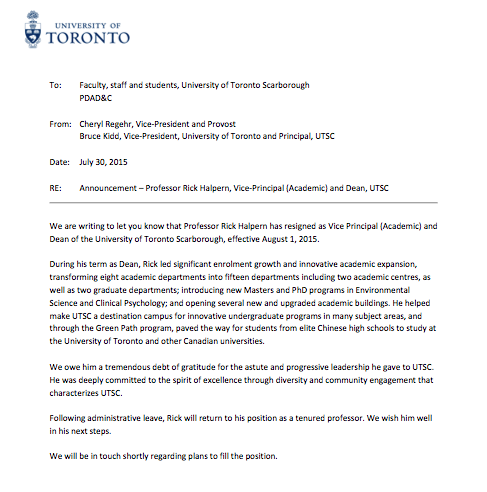 The Toronto Star on Mar 5, 2015 Scientists critical of University of Toronto homeopathy study

National Post on July 6, 2015 Students at University of Toronto being fed bunk on immunizations as part of alternative health course

We are writing to let you know that Professor Rick Halpern has resigned as Vice Principal (Academic) and Dean of University of Toronto Scarborough, effective August 1, 2015.

During his term as Dean, Rick led significant enrolment growth and innovative expansion, transforming eight academic departments into fifteen departments including two academic centres, as well as two graduate departments; introducing undergraduate programs in many subject areas, and through the Green Path program, paved the way for students from elite Chinese high schools to study at the University of Toronto and other Canadian universities.

We owe him a tremendous debt of gratitude for the astute and progressive leadership he gave to UTSC. He was deeply committed to the spirit of excellence through diversity and community engagement that characterizes UTSC.

Following administrative leave, Rick will return to his position as a tenured professor.  We wish him well in his next steps.

We will be in touch shortly regarding plans to fill the position.

The memorandum is not uncommon in its content and style when it comes to changes in leadership at big organizations.   It may be expected that the University will wish to retain details of a change like this as a confidential matter between their Human Resources Department and Halpern.  Was there pressure to make changes due to public outrage over recent events?  Were students and faculty upset?  At this time, we just don’t know.

However, just as the University of Toronto administration promises to “be in touch shortly regarding plans to fill the position”, CFIC will be shortly be issuing a follow-up letter to our February 26 letter to The University’s President.   We want to focus on the future for U of T Scarborough.  You may expect that CFIC will encourage the University to seek a new Vice Principal and Dean who will:

If you think wearing a piece of cloth makes it “hard to breathe”, then trust me you do NOT want COVID-19.

Birthed in the first second after the Big Bang, primordial black holes could offer answers to astronomers’ outstanding questions ... if they exist. http://pst.cr/oUsYi