On April 30, 2015, CFI Okanagan and the student group, UBCO Skeptics, collaborated to screen the documentary, the Honor Diaries, on the UBC Okanagan campus. The Honor Diaries is about the issue of honour violence. We thought carefully before screening the film, and solicited input on doing so.

A couple of CFI Okanagan volunteers are ex-residents of Iran and they both felt strongly that the documentary should be screened. They felt that the general public ought to become more informed about the ways in which Islam in particular is being used by some Muslims around the world to harm other Muslims. They felt that the voices of people who suffer because of Islam should be heard.

Others thought that, given the film’s producers, it was likely so biased and “Islamophobic” that screening it would be useless at best, and promote prejudice against Muslims at worst.

Ultimately, we decided to go ahead and screen it, but felt that it was important to do so with care.

We didn’t want it to appear that we were concerned only about human rights atrocities committed by “foreign others”. So a few weeks prior to screening the Honor Diaries, we showed the documentary, We Were Children, which is about the church-run residential school system in Canada. Of course, Christians are just as capable of human rights abuses as Muslims, Sikhs or Hindus. And Canadians are just as capable of human rights abuses as Pakistanis, Indians or Iraqis. We invited a residential school survivor to speak after We Were Children about her own experiences, and the event was valuable and very moving for everyone who attended.

We became aware of various biases that the producers of the Honor Diaries might have and we wanted to make sure that those who came to see the film approached it with a skeptical mind. So we had a speaker introduce the film, and she raised and addressed various criticisms of the film’s producers and collaborators, and encouraged the audience to engage their critical thinking skills, and to approach the documentary with a skeptical mind. She also talked about some specific examples of honour violence around the world.

We also ensured that the audience had an opportunity to discuss the issues raised by the film and to learn from one another about any flaws that we as individuals may have missed.

We did not preview the film, for two reasons. First, we had rights for only one group screening. (Incidentally, because the screening was at an institute of higher education, we did not have to pay the film producers anything for the rights to show it. So none of CFI Okanagan’s money was transferred to the film company.) Second, if only one or two individuals privately viewed the film, they would be elevated into the position of arbiters of the content. Giving an individual that right seemed worse than simply enabling adults to view the film, encouraging skepticism and awareness of possible bias, and allowing them to make up their own minds about it. As when we invite a speaker to give a presentation, we know the speaker’s credentials, and have a general idea of the topic, but it’s always a risk since we don’t preview an entire presentation and can’t know for sure if the content will be any good. We have to trust our audiences to come to a judgement for themselves.

Within the next few days, this post will be followed by a post written by CFI Okanagan’s branch manager, Zena Ryder, on her thoughts — in retrospect — regarding the question of whether screening the film was the right thing to do. 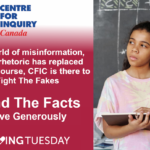 CFIC Asks You to Fund the Facts

#FundTheFacts
Throughout this year, CFIC has been working tirelessly to create an awareness among the public.
https://buff.ly/3lpsdks

#FundTheFacts
Throughout this year, CFIC has been working tirelessly to create an awareness among the public.
https://buff.ly/3G8x817