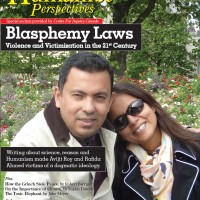 E-petitions are a new feature of Canada’s federal political landscape – one which promises to increase the level of access to Parliament by Canadian citizens.

We need your help! The sponsoring Member of Parliament,Ali Ehsassi (Willowdale), requires 500 signatures within 120 days to demand a response by the federal government. What does the E-petition say?

Petition to the Government of Canada

We, the undersigned, residents of Canada, call upon the Government of Canada to repeal section 296 (Blasphemous Libel) of the Canadian Criminal Code.

Now is the time for Canada’s Blasphemy Law to fall!

For more Information regarding Criminal Code Section 296 and its history, to download a sample educational letter for your local MP, and its connection to other blasphemy laws around the world, visit CFIC’s website.

I have examined blasphemy laws in over 50 countries and, regardless of the the intentions of their proponents, they universally become tools for repressing minorities and critics. They also choke debate about and within religions. No country that values robust criticism and discussion should have such laws.

Blasphemy laws are archaic, irrational, repressive, and an embarrassment to a modern democracy.

As a professor of Religious Studies whose research and teaching subjects involve the critical examination of scriptures and beliefs held by many people today, Canada’s retention of a blasphemy law is very troubling. This is especially so given the increasing polarization of different political and religious groups in Canada and the horrific violence and discrimination of religious and secular minorities in many parts of the world.

There also seems to be a growing sensitivity to any perceived offence, and so “playing the devil’s advocate” in a class room carries a very real danger of being misunderstood.  The law is a potential recourse for those offended by what is said in the context of Religious Studies or other academic disciplines and this only makes the teaching and the dissemination of this work more difficult than it already is.  I feel it is only a matter of time before an academic or other student has to deal with threats of court action for something said in a class or written online or in print. Even though I consider it unlikely that myself or another professor may be found guilty or even charged under the law, any defense of the need for such a law is troubling.

Public discourse about religion hardly needs such a law. Most people already are respectful of others’ beliefs, and government agencies, political groups, corporations, and educational institutions generally follow their own policies of respect without reference to the law.  The ending of the blasphemy law is not an attack on any religion or religion in general, but rather is recognition of the significance of Canadian Charter of Rights and Freedoms. The right to say nothing controversial is hardly a right at all.

It is important that Canadian citizens and the government are aware thatwhen we criticize religious and faith-based violence in other countries where blasphemy is punishable by death and imprisonment, we undermine our cause by still having a blasphemy law of our own.

The blasphemous libel law is an affront to free speech and human rights. If Canada seeks to “move forward as a county”, then the Canadian government must recognize that blasphemy laws put marginalized groups, who have historically been the targets of religious persecution, at risk.*It is a conflict of interest for a secular society and for a country who both proclaims and recognizes the separation of church and state to still have a blasphemy law in the books.

Canada’s blasphemous libel law is an outrageous relic, a clear violation of charter rights, and a completely unjustifiable chill on free expression in our country.  Every good journalist and free expression defender is opposed to this archaic law, and it must be scrapped. The fact that it is unlikely to be used is no excuse to have criminal libel on the books in a western democracy. Even worse, Canada’s blasphemous libel law gives a tragic comfort to despotic leaders around the world who use such regulations to jail free thinkers. It allows them to point to this Canadian statute as a shining justification for their choice forms of oppression.

Do you have something to say about Canada’s blasphemy law or blasphemy laws around the world?  Please add your comments below!