Centre for Inquiry Canada is starting the new year, and re-starting our Vancouver, British Columbia Branch with a panel discussion with former Christian, Muslim, and Jewish religious leaders talking about their experiences of losing their beliefs.

Our moderator is former Christian pastor Dan Barker, co-president of the Freedom from Religion Foundation.

This hybrid event, co-sponsored by FFRF, is presented in person at at UBC Robson Square, and streamed live on Zoom across Canada and around the world. Join us for an enlightening discussion, Sat, Jan 28, 2023, 2:00pm PST.

Registration is now open to attend in-person, or live online via via Zoom. Admission is by donation to CFIC.

END_OF_DOCUMENT_TOKEN_TO_BE_REPLACED

About last time, Alex B. sent along the idea that this was worth thinking about — thanks! My own view of the possibility and necessity puzzle is really that there is not much use to modal logic as presented. It does entail that calculating possibility is harder if one uses (for example) a state space approach. There is something called “provability logic” due to Boolos (not Boole!) that is useful in some contexts, but it is about purely logical possibility. I do not know why philosophers really enjoy the modal logic approaches. All I was ever taught (by their partisans) is that finally we understand possibility and necessity better through them. I simply dispute this.

For those who follow philosophy of religion, ask how you would use modal logic to analyze the traditional theological claim “God is a necessary being.” This is harder than it sounds, especially if one keeps the domains and ranges correct as I have suggested one must. Hint: Alvin Plantinga’s use basically reduces to a question of which modal logic to use, and he has to independently motivate that or beg the question. (Worse, he then must contend with the domain question, too.)

This month’s conundrum is a slightly crazed trivia puzzle, which, if completed successfully, entitles the solver to a prize! Each clue is semi-independent, and together they should help you locate the prize. Your accent (whether Australian, Canadian, German, or Korean) will not help you.

Inquiry… For a More Secular Nation

Research has shown that secularism and quality of life are correlated. And although Canada has made progress towards becoming a more secular nation since Confederation, we still have far to go. It is through the process of inquiry that CFIC makes Canadians aware of the degree to which government decisions are based on religion, the degree to which religious beliefs allow institutions to flout human rights legislation, and the degree to which Canada’s strong affiliation with faith groups is costing our society. It is through inquiry, that we understand and can change this.

This year, CFIC, along with our humanist partners, successfully petitioned the Government of Canada to include atheists in the less complex claims process for refugees. We continue to call out the human rights violations in Alberta, Saskatchewan, and Ontario for funding Catholic school boards and we published the final report in a series that quantifies the cost of a single, misplaced, non-secular policy which provides charitable status to organizations whose mission is to proselytize.

Further, this year, CFIC concluded our five-part Cost of Religion in Canada series, demonstrating that funding religious charities costs Canadians $5.5 billion each year. Through this inquiry, CFIC has highlighted the antiquated charitable purpose of “advancement of religion.” Only inquiries such as this will shift our nation towards more secular policies.

CFIC has suggested that people inquire about the validity of the census data on religiosity in Canada. We submit that this data is based on a misleading question about religion. CFIC is currently strategizing on how to include a more accurate question about religion in the 2031 census. Perhaps most importantly, CFIC provides leadership by helping Canadians understand and interpret the data on religion.

“Secularism matters. Research has shown that religiosity and quality of life are inversely related. Where faith determines (or significantly influences) public policy, society suffers from greater rates of homicide, violent crime, poverty, obesity, diabetes, child abuse, unemployment, and teen pregnancy. Conversely, where governments neither support nor suppress religion, incomes tend to be higher, life spans longer and people happier. In short, society thrives. This is true both between countries (Japan and Netherlands vs. Colombia and Pakistan) and within them (compare Vermont and New Hampshire to Mississippi and Alabama). Violating secular principles comes at the cost of a significant reduction in a society’s quality of life.“

Inquiry… It’s in our name.

Last year we asked our board and leadership team to make some predictions for 2022. This year we asked them to comment on how accurate they were. While not all of them provided feedback, here’s what they said.

Our leader and President, Gus Lyn-Piluso, had only one prediction: He assured us that the Leafs would win the Stanley Cup in 2022. However, this year, Gus lets me know that there was a typo last year, he actually predicted the win for 2023.

Alex Kenjeev was much more serious. “Things will get worse before they get better, because technological and cultural forces will continue to overwhelm us. In the coming year, we’ll see more distractedness, more tribalism, and more polarization — at the cost of less deliberation, less fraternity, and less connection.” Although Alex is no longer living in Canada, and therefore no longer serving on the board, he generously provided feedback on his prediction: “Have we, in fact, seen a measurable increase in polarization, distractedness, and tribalism in 2022? Evidence is scant, and mixed, with room for cautious optimism.“ In the U.S., meanwhile, polarization and tribalism have increased dramatically, with a growing majority of people believing that those who disagree with them are dishonest, immoral, and hostile.

Anecdotally, the year also saw some glimmers of hope. Skeptics of all political leanings can celebrate the electoral defeat — by a wide margin — of the charlatan Dr. Oz by the people of Pennsylvania. Voters in the world’s fourth-largest democracy also resoundingly rejected the conspiracist Jair Bolsonaro.

Leslie Rosenblood, CFIC’s Secular Chair, gazed into his crystal ball at an issue that has been divisive in Canada — Quebec’s Bill 21, suggesting that regardless of the ruling of the Quebec Court of Appeals, at least one of the parties will seek to take the issue to the Supreme Court of Canada. “Though the Supreme Court declines to weigh in on most of the cases it is asked to hear, I believe the constitutionality of Bill 21 will be one of the issues it decides on (though likely not until 2023).”

Leslie stands by his previous prediction, modifying only the timeline: “Regardless of the outcome, it will be appealed to the Supreme Court, which will agree to hear the case. The timeline might stretch into 2024 or even 2025; the wheels of the justice system turn slowly.”

Sometimes the crystal ball comes with a bit of insider information. Leslie also predicted the launch of the Podcast for Inquiry, which was a “for sure” thing since it was well into the planning stage. For this reason, CFIC’s Executive Director of Development, Sandra Dunham, predicted that Leslie’s prediction would come true — which it did. However, in a bigger and better way than anyone imagined at the time. Sandra also predicted the launch of a new strategic plan for CFIC which was released in March of 2022.

CFIC Vice President Seanna Watson‘s prediction for 2022 was two-fold. “First, with much hopefulness, I predicted that the dominant strains of SARS-CoV-2 would have mutated to be as mild as the common cold. Second, rather facetiously, my forecast was that we would run out of Greek letters, and start using the Klingon alphabet instead.”

In reality, the virus continues to be full of surprises. Variants are different, but, sadly, still able to cause serious illness and death, particularly in unvaccinated people. SARS-CoV-2 appears to have found a winning formula with Omicron, currently the only lineage classed by the WHO as a “variant of concern,” so there are still lots of Greek letters left.

Board member Edan Tasca wondered about the future of climate change. Recent announcements about fusion suggest that we may have a sustainable solution for greenhouse gas emissions in the future. Until then he continues to hope that common sense and science will win and we will stop fearing nuclear power.

“I stand by my comments of last year — nuclear is safer than oil and coal. I regret that we have not moved farther forward on this in spite of increasing weather events that make it difficult for even the most anti-science communities to continue to deny global warming. And I’m proud to continue to be involved with CFIC. This tiny organization has literally saved the life of Omer who will soon join us in Canada. And, as Managing Editor of Critical Links, I’ve enjoyed learning about science and secularism, thanks to our great writers.”

Zack Dumont is CFIC’s Science Chair. These were his predictions for 2022.

Although he’s great at science, Zack is really lousy at the crystal ball. However, he offers this: “One of the beautiful things about science is that being wrong is part of the process. And I unabashedly declare I was most certainly wrong with my predictions! COVID did not technically enter the endemic phase, though we humans sure are acting like it. I mostly blame less-than-ideal vaccination rates… resulting in unneeded mutations and variants. My family and I still mask in public. Saskatchewan VIDO lab did not seek vaccine approval. About this, I was just plainly wrong. Turns out VIDO will not pursue becoming a commercial vaccine producer; instead, they’ll continue to focus on manufacturing discovered vaccines (from universities or small biotech companies who don’t have the infrastructure for their own manufacturing facility).”

McDonalds did not bring the McRib to Canada. But, thankfully, I did make it to the U.S. in November to be part of the farewell tour. 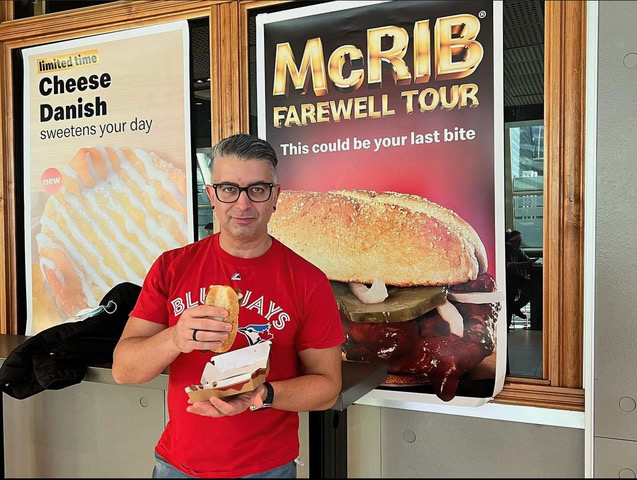 Podcast for Inquiry Turns One

Podcast for Inquiry has just wrapped its first year, and what a year it’s been! Here’s a sample of what we’ve accomplished:

And it’s just going to get better.

The first episode of our 2023 season will be phenomenal. I talk with Phil Zuckerman about his book What It Means to be Moral, and he pulls no punches. If you want a full-throated, no-holds-barred attack on the foundation of religious “morality” that is worthy of any of the Four Horsemen of Atheism, you’ll want to listen to our next show (to be published January 4).

I’m so incredibly proud of what we’ve accomplished, and humbly thank you for giving me the opportunity to be Podcast for Inquiry’s host. It has been, and remains, my passion project.

I want to give special thanks to Matt Payne, who has been our editor and producer from the start. He made every episode look and sound professional, even at the beginning when I was using my laptop’s internal microphone to record my voice. He made sure every episode was edited, produced, and published on time, and has always been on hand to address any issues that arise. We couldn’t have done it with you, Matt. Thank you so very much.

For those that haven’t yet listened to Podcast for Inquiry, you’re missing out on a great conversation, every two weeks. For those who have subscribed, thank you — and let me know (podcast@centreforinquiry.ca) what you like and where we can improve.

It’s been a fantastic year, and I’m very excited for everything we have planned for 2023.